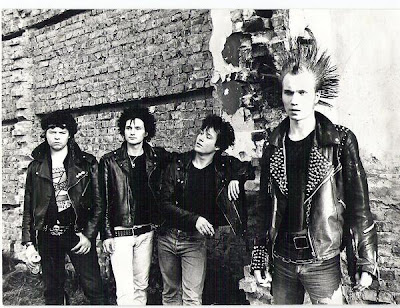 Lasse, THE SHITLICKERS, is interviewed by Christ, Driller Killer.

OK, let's take it from the beginning. When and where did The Shitlickers start? Did you sound much different then? What other bands did you play in?

- Me (bass) and Jimmy (guitar) started The Shitlickers/Skitslickers in Gothenburg, Sweden, in the beginning of 1981. Gutte played drums and on vocals Jimmy's girlfriend. At this time I worked as a roadie for UK punkbands, and made us a support band to The Exploited. We played some kind of rock 'n' roll-punk and it sounded terrible. This was the only gig we did with this line-up. We started a new band with me on vocals, Jimmy on guitar, Gutte on drums and Sixten (GBG-Punx, Anticimex...) on bass, and with another musical direction. In lack of another band name, we kept The Shitlickers. We wrote new, fast, short songs with heavy riffs and lyrics with violent content. We did one gig with this line-up before Jonsson took over the bass (at this time Jonsson also played bass with Anticimex), and Bob Stacy, a security guard at the nightclub Roxy, took over the drums, and the real Shitlickers was born. Other bands? I played bass with GBG-Punx (-82) and drums with Troublemakers (-83). 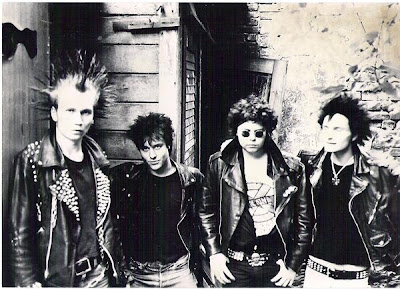 When did you first hear raw punk? Did you ever called your music raw punk? Did you talk about "D-Beat" at this time? Shitlickers were very early with that kind of brutal music, where did that inspiration come from? If there is any other swedish band around this time that could compare to your brutality it is Anticimex. Jonsson played in both bands, do you think that this had any affect?

- In the winter of 1981, we and a couple of other bands (Anticimex, Asta Kask...) played at Rockers Club. That gig became the start of Swedish hardcore punk. We called the music hardcore punk, raw punk, trash punk etc. Discharge inspired, but we wanted to find our own style. Me and Jimmy wrote the songs, but Jonsson always delivers, both as a person and as a musician. We had no Swedish references at all. Our influences came from the UK, which was easy to get to by ferry from Gothenburg. I listened, and still do, to 4-Skins and Cockney Rejects, even if they played another kind of music than we did. 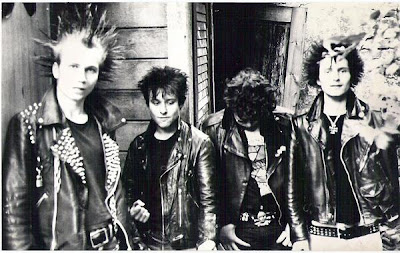 - Yes, we recorded the first album THE SHITLICKERS in the spring of 1982 at Studio Lane, Gothenburg. People think that we broke into the studio in the middle of the night, recorded on stolen instruments and skipped as fast as we came. It's a myth. We took the recording most seriously. We knew that we had to find a sound that would differ us from other bands. E.g we put the guitar amplifier in a closet and made a hole in the membrane with a syringe needle which gave us our specific guitar sound, and we added 4-5 identical guitars on each song to get a fat sound (as Pistols did). The same thinking applied on the other instruments; a lot of reverb on the drums, high middle register on the bass for distinctive sound etc. We experimented. The mistake many bands do, who play in genres where there are few opportunities to separate one band from another, is that they don't spend time on their wall of sound, which makes everyone sound the same and very few sound unique. The second album THE SHITLICKERS II was recorded during the fall of 1982 (in the same studio). We wanted the music to take a new direction with a darker sound and longer songs, but the compositions were too poor and we where in a lousy condition. The thrill was gone and we knew that this was the beginning of the end. The dissatisfaction with the album made us unwilling to release it until 15 years later. 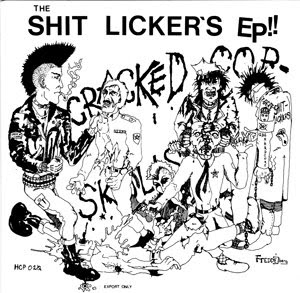 The first album was released with two different covers; 1. GBG 1982 with the knife in the stomach and 2. the sketched Cracked Cop Skulls for the foreign market. Did Malign Massacre print both with a total edition of 300 copies? Why two different covers? Do you know how many different prints there are? The split EP with Anticimex is a bootleg, isn't it? Do you know who released it? Have you given approval of more prints of the first album, besides the original (and by that I don..t mean the Distortion-print with Silence, I presume that was approved by you)?

- There is only one vinyl version of the first album; knife in the stomach on the front and a photo of the band on the back, white label, 300 copies, own release. All other releases (Bullshit Records, Malign Massacre, sketched cover, split with Anticimex etc) are bootlegs, not approved by us. The interest for the album was immediately big in Sweden and abroad. Record companies in UK wanted to sign us. So the information spread fast world wide, even back then. Jimmy has a couple of the original album left, I lost my only copy in a separation. I do have a live recording that will not be released due to bad quality, that embodies some other songs not released on the first two albums. 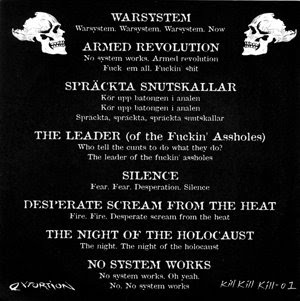 The Shitlickers is one of the most mythical bands from this era. Why is it so, do you think? I have never seen any interviews with the band, and the rumour says that your live performances were extraordinary, with a brutal singer in front. Could this have something to do with the fact that you were around for such a short period, released an album, did a couple of gigs and then disappeared?

- Many reasons; we were one of the first bands in the world in that genre, we did a record with a personal, specific and identifiable sound, and with strong songs people remembered, our violent gigs, that we existed during a short period (1981-1982), that we left the punk community (at least me and Jimmy, who disappeared into the biker world). We haven't given any interviews, protected the trademark and don't participate on any compilations with other artists. The band members were also colourful characters. The fact that we in the Shitlickers-sphere were oldest among the hardcore punks also mattered. The young ones looked up to us and we didn't have to care about what other people think and thought. E.g. Jonsson and I often listened to 50's rock like Elvis, Dion and Sedaka, so the young punks must have been quite confused. Sure, we could be a mean bunch, but we took the band, the music, the rehersals, gigs, the recordings, the covers etc in real earnest. The music came first, everything else was of secondary importance. And we knew what we were doing. We knew that a band, no matter which genre, must have a) good songs, b) a personal sound and c) an aggressive marketing. 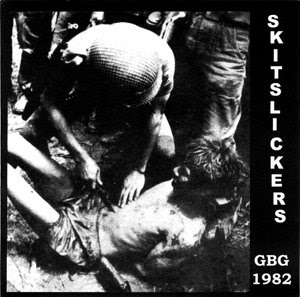 Your lyrics stands in a class for themself. Who wrote them and from where came the inspiration? Did you ever see yourself as a political band? War lyrics amongst raw punkbands are not unusual, and I suppose you've got some inspiration from Discharge?!

- Unfortunately, there were a lot of drugs in the scene. Like in the society today. And we had some problems in the band. When it comes to violence, there wasn't much difference on stage or off stage. I was always in a fight, due to my short temper and partly because no one stopped me. It was like in A Clockwork Orange. When you're a teenager, you want to test limits, and you do so until somebody you respect says stop. You looked up to bikers, and there was never any trouble, on the contrary, they stood up for the punks, and they often visited the gigs, and some of the older punk bands played at biker and rocker places. It was a big difference between Gothenburg and the rest of Sweden. When we started, Jimmy shared an apartment with one of the skins, and we had some parties with them. We had different values, so it was natural that we started to hang with the, at the time, small crowd of hardcore punks instead, which just a half year later had become a whole movement. 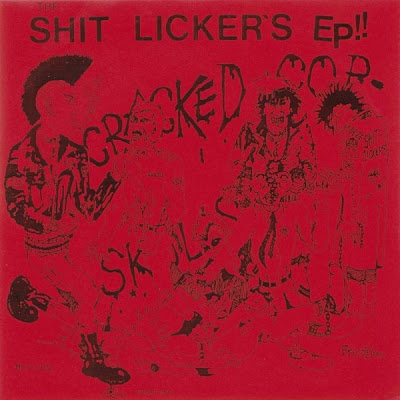 - We, who were involved in the punk scene in the beginning of the 80's, experienced presumably what the punks experienced in -77; something is happening here that no one has experienced before. Something new. Haga became the centre of the new music, so it had an enormous importance. And almost everything was in the same block; our rehearsal room, Sprangkullen, Roxy... Haga was just like Christiania in Copenhagen, Denmark, a sanctuary with its own rules. And there were a lot of opportunities for live performances in and around Gothenburg. You started a coverband just for one night, and played songs of old punkbands from Gothenburg, like Goteborg Sound, Perverts and The Leather Nun. Let us not forget that it was people from these bands - like Lob, Blomgren, Freddie Wadling and Jonas A - who supported the raw punks, so they meant a great deal, not in a musical sense, but in other ways, also for the new scene. I believe that Shitlickers was the most important band for the genre in the beginning. We set the bar for recordings, live performances and organization. It was e.g. Sixten and I who arranged the first raw punk festivals at Sprangkullen. Anticimex became the most important band for the survival of the growing genre.

If you want to document the beginning of the Swedish raw punk scene, what bands do you not wanna forget? Do you think that Egg Tapes and Really Fast meant much?

- Egg Tapes didn't exist during our time, I don't know what Really Fast is. Anticimex was our friends, but our musical competitors. We were older and had bigger jaws, and we made sure always to play before them in the playing list, 'cause when we were finished, the audience had got so much beatings that they had gone home.

Have you ever after you quit in 1982 talked about a reunion? Opinions about bands that reunite? Why did you quit? How does it feel to get responses from all over the world because of something you did so many years ago? 25 years too late, or what? :-)

- Sure, it's great when kids of today credit what you did. But it's a long time ago now. We quit because we didn't have much more to give, and we have never discussed a reunion live. But I don't have problems with bands that reunite. If the money is right. 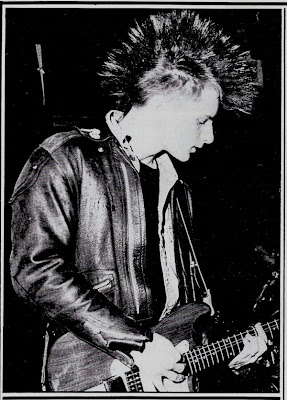