Yeah!!...a old and many nice friend called RISTO ERONEN from SHJ Records in Finland made this interview to me with the amazing JÄTESAHA back in 1998..or just 10 years ago!!!
And how i want to publish here the most cool things of my old zine i decided to publish it here too...since i don´t hear many things about them...maybe they broke up...i have just their amazing split ep with HARDCORES...
And now......JÄTESAHA !!!
+Published in Vermynoze Putrida Zine Number 22-november-1998+

"JÄTESAHA is a band wich comes from Oulu,Northern Finland,They play simple and furious hardcore w the style of RIISTETYT and KAAOS.A year ago JÄTESAHA put out a self-financed 7" split ep with HARDCORES (Other great HC band from Oulu) and after sending a review copy to Fofão.I decided to do an interview of JÄTESAHA for V.P. Zine.
Tumppi=the vocalist,answered the questions.Here goes..."
(RISTO ERONEN-SHJ RECORDS) 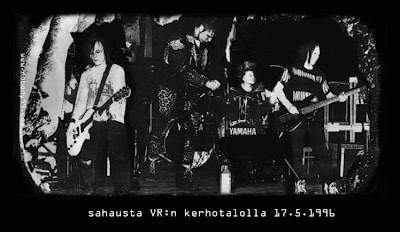 VP=Beguining cliches,when and why JÄTESAHA was founded.who are the players & how old are you? what are you doing in the "civilian-life" along with the band?
T=JÄTESAHA was founded originally in january-1994,then we had the different name and line-up.
The reason for forming a band was very simple:we just wanted to play and nowadays it has comes as a way of life.
JÄTESAHA consists for 4 members=ANA-GUITAR,PETE-BASS,SAMI-DRUMS and TUMPPI-VOICES,Ana is 29 years and unemployed he plays also guitar on HARDCORES and drums on GANGSTERS.
Pete is 32 years and he´s on computer courses.Sami is 19 years and unemployed,play drums in some crust bands.And me (Tumppi) i´m 19 years old and i´m on training for the work.I publish fanzine with my girlfriend called TEHOKAASU and it´s 3rd number out now.
Also on the works is a compilation tape wich includes Colombian hc/noise.I´m planning to start a little distro,but i had to have some money so i could take records for sale.

VP=Who write your songs and what are they telling about? in wich kind of situations the lyrics comes to your mind?
T=Mostly the songs are made by me and Sami,but also Ana and Pete have done some songs.
Well,the lyrics deal with the same subjects as others hc bands have like war,violence and so on,anyhow the new songs are changeable in relation to both lyrics and music and i think that´s a good thing.
Some lyrics have born in the time when i´ve walked in the town at traffic-jam and looked at people there,how they walk like big zombies masses without hearing seeing nothing.They´re like automatics.who walk from cradle to the grave and obey the rules thry´ve learned from fucking society.Then i´ve thought: "no thanx" "i don´t want to be part of that shit".
Some lyrics have come under the big pressure/opression and in generally they are fucking desperate,as an example i could give lyrics from old songs it tells about how i´m going to another,better world where nobory feels hate & bitterness and i´ll be the place where i could be free without anybody watching you and what are you doing.
Then some lyrics tells about the dishonesty of people,example "Viholiseni" or "my enemy" is made,When i had to disapoint to people i´ve trust.

VP=Give me a short list of bands who are your favourites/influences?
T=My personal favourites are: RIISTETYT,DISORDER,CÓLERA,KAAOS,LOBOTOMIA...I could go on forever,but i think those are just few examples.

VP=Your relations to alcohol,drugs & SE punks? How about vegetarism,is there found any supporters of it from JÄTESAHA?
T=Everybody from JÄTESAHA drinks alcohol more or less.My girlfriend is a Straight Edge so at least i don´t have nothing against SxExs .I will let live their lifes and hope the same from them.
I think the drugs are full of shit.i´ve never used and never will be,same goes for the mixing alcohol and medicines.
I don´t see any reason to destroy yourself with this kind of junk,of course alcohol kills you too if you drink it everyday but hard drugs kill you faster.
Anyhow somebody wants to do drugs that´s their business.
We´ve 2 vegetarians on band; Pete and I.Sami and Ana eat animals,but it´s their personal thing.

VP=A year ago you got released a split 7" with HARDCORES,how did you ended up in this solution and what was the quantity of print?
T=Yeah,the record has been done and we pressed 300 copies.
At first we planned to do a split tape ,but then we thought to realease it as 7" ep.
If we could get chance to reahearse,we´d purpose to go into studio to record own ep called "Myyrän Maailma" 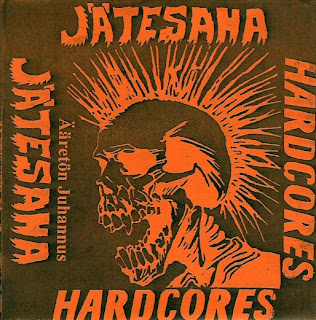 VP=Opinion about current punk scene? do you like example these melodic US bands wich are popular everywhere,how about 77 revival ?
T=Oh...what could i say into this...i think,punk scene is quite good,new labels have come along into it even here in Oulu and that´s great! there´s zines,bands,gigs,etc.bad thing is that punks fight against others.
Some people who thinks they are important and unique tells others "if you don´t do this or that" you are not a punk or if you listen this and that band you are not a punk?
Why we have to fight such on things,wich don´t lead anywhere??
If those melodic yankee bands are same as offspring and green day,i don´t like ´em !! I simply can´t standing on them!
For sure i´ll listen 77 styled bands quite a lot,mostly older Finnish ones and from newer acts like PUNK LUREX OK!

VP=Multinational companies have caused discussions among punks in last years,so do you have to buy cokes,hamburguers and (S)hell gasoline? do you use products wich are not tested on animals?
T=I´ve left behind cokes and hamburguers ages ago,Pete is only from us whow owns a car and he don´t fill tank at Shell and it´s good!
My shampoos and soaps are not tested in animals,i feel good,when my hair is not washed on rabbit´s blood,i try to live so far as i can without anybody harming animals for me.medicine is the only problem,but fortunatelly i don´t need eat´em that often.

VP=Final comments?!
T=Many thanx for the interview!
punks in Brazil,please take in contact only just for fun and bands from there offer your records for sale´em here.
Bands could be write too for possibily interviews on my zine!
all the best! 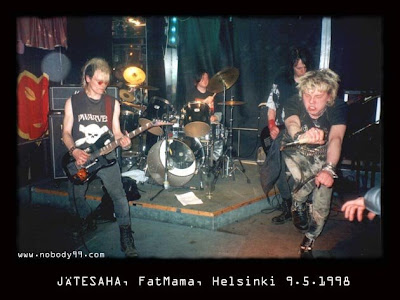 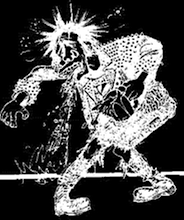